This Event Has Already Occured

$1,500
Sold Out
All the same benefits as the GA Reserved seating plus:
Note: GA ticket holders DO NOT have access to VIP Ball Drop View Patio between 11:15pm – 12:05am

$2,500
Sold Out
All VIP Ticket Packages includes all of the General Admission benefits in addition to the following elements:

$3,500
Sold Out
All VIP Ticket Packages includes all of the General Admission benefits in addition to the following elements:

$5,000
Sold Out
All VIP Ticket Packages includes all of the General Admission benefits in addition to the following elements:
*Ticket Prices Subject to change

Experience a once-in-a-lifetime New Year’s Eve in New York City with a Exclusive VIP Party overlooking the world-famous Times Square celebration and NYE Ball Drop. This rare event only takes place once a year, allowing a select number of guests to participate in the largest party of the year from the comfort of the beautiful Marriott Marquis Times Square! This private party and viewing takes place inside the Broadway Lounge, located on the 8th and 9th floors of the beautiful Marriott Marquis Times Square and gets you front-row views over the entire Times Square NYE extravaganza: the live show and performances, the neon lights and excitement of the millions of celebrants below, and the iconic Times Square Ball Drop. The New Year’s Eve VIP Party takes you front-and-center to NYC’s Times Square, the biggest NYE celebration in the world. Party the night away amid exhilarating Times Square on NYE energy as you take in amazing views of prime Times Square below and the New Year’s Rockin’ Eve main stage. At midnight, Direct Ball Drop View guests will experience an unobstructed view of the world-famous Times Square NYE Ball Drop as the party counts down with the millions gathered below. The confetti shower, the roar, and the thrilling energy of the Times Square crowd: it’s going to be an unforgettable NYE night.p.

The New Year’s Eve VIP party takes you to NYC’s Times Square, the biggest NYE celebration in the world. Drink, dine, dance and party the night away amid the exhilarating energy of Times Square on NYE. Drink. Your evening begins with a 5-hour premium open bar. Dine: A gourmet dinner buffet and tantalizing dessert buffet will keep you satisfied. Dance: Top DJs will be spinning open format top 40, Hip-Hop and more. Live entertainment to be announced soon. Your party experience will be unsurpassed by any other NYE event, Choose from multiple ticket options offering amazing views of prime Times Square below from its floor to ceiling windows and from its exclusive patio. At midnight, Ball Drop View VIP guests will experience a live view of the world-famous Times Square NYE Ball Drop as the party counts down with the millions gathered below. The confetti shower, the roar, and the thrilling energy of the Times Square crowd: it’s going to be an unforgettable NYE night.

Be at the heart of the most iconic NYE celebration in Times Square with all the warmth and luxury of an exclusive NYC private event and special access to Robin Thicke's surprise concert. Taking place on the 8th and 9th floor of the renowned Marriott Marquis Times Square, this VIP party will shower guests with luxurious amenities. The exclusive, invite-only affair boasts NYC’s famed nightlife standards and offers VIP ticket packages with reserved seating, VIP Patio Access, and Ball Drop views. Situated in the heart of Times Square, a stone’s throw away from the Ball Drop, Marriot Marquis Times Square features sophisticated décor – complete with beautiful orb chandeliers – and a wall of windows overlooking glittering Times Square.

Join the New Year’s Eve Annual Marquis VIP Party and usher in the New Year with the thrill of the Times Square NYE celebration and spectacular views of the iconic Ball Drop. 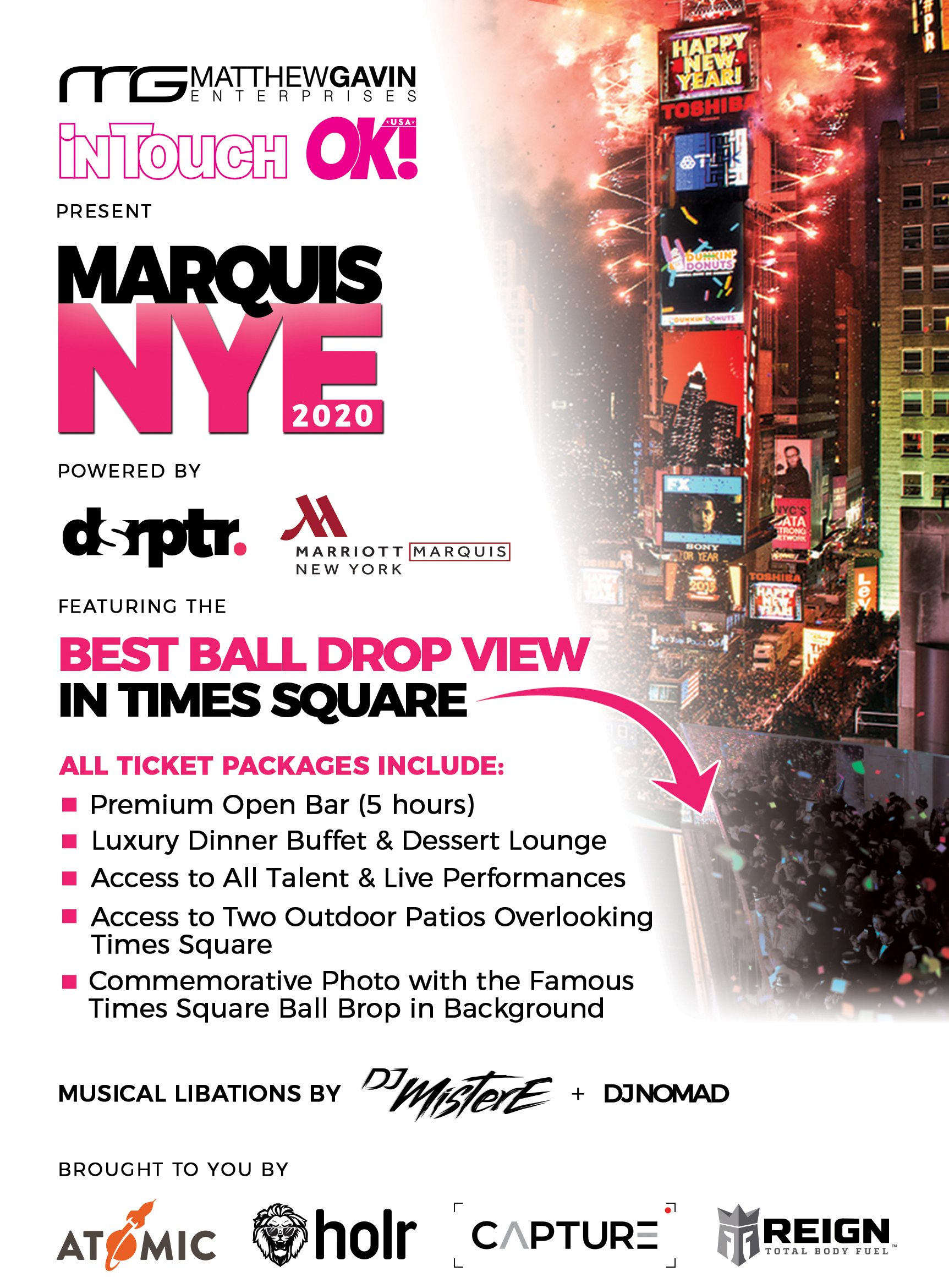 Bret first rose to fame as the front man of Poison, helping to define the rock-n-roll scene on the Sunset Strip.  One of rock’s most iconic and enduring bands, Poison’s massive success includes selling over 40 million records worldwide and numerous hit singles.

Equally as successful as a solo artist, Bret Michaels’ career has charted its own course with multiple solo albums. His album, Custom Built, topped the charts, reaching #1 on Billboard's Hard Rock list. Michaels is currently on his worldwide Unbroken Tour, which will continue throughout the spring of 2020, and his  latest single and video, “Unbroken”—which he cowrote and recorded with his youngest daughter, Jorja Bleu is out now.

Michaels then brought the record-breaking Rock of Love with Bret Michaels franchise to VH1, one of the most successful shows in the network's history, shattering weekly rating records during its run. Following three successful seasons of the show, he teamed up with VH1 for the docu-series Life As I Know It setting even more records. Bret has also starred in and won the NBC hit, Celebrity Apprentice. He raised well over $300,000 for Diabetes research, Michaels, personally and through his Life Rocks Foundation has helped raise tens of millions of dollars for charity and makes donations to not only diabetes awareness and research but to such causes as childhood cancer, wounded warriors, St. Jude Children's Hospital, PetSmart Charities and more. Having been diagnosed with Type I diabetes at the age of six, Bret is passionately devoted to raise awareness of the disease in hopes of finding a cure. He has partnered with both the American Diabetes Association and the JDRF acting as a spokesperson and sponsor, earning the ADA's first ever Chairman’s Citation award.

Most recently he was honored with the Humanitarian of the year award at The Hollywood Parade. Next summer Poison will join Def Leppard, Motley Cue and Joan Jett and The Blackhearts on The Stadium Tour.

Elliott is the granddaughter of 6x Grammy award-winning recording artist, Dionne Warwick and cousin to the late Whitney Houston. The singer was also a recent finalist on the hit music competition, “The Four: Battle for Stardom” alongside celebrity panelists: Diddy, DJ Khaled, and Meghan Trainor. Elliott is set to release new music in 2020.

Jennings is widely known for his time with the New York Giants football team, but instead of taking the field, the former NFL star will take Main Stage and serve as host and Emcee for the evening. In addition to Jennings time in the NLF, the former Running Back also went on to take home the Mirror Ball trophy in Season 24 of Dancing with the Stars and make The New York Times Bestsellers list for his book, “The IF in LIFE…”

Alyse Zwick is a news personality/host, Emmy-nominated reporter for Fox 5 New York, and actress in New York City. She can currently be seen hosting for the WWE Network’s, This Week In WWE. She is the former Arena Host with the NHL’s New York Islanders & was Miss New York 2009 for the Miss America Organization.

This event is a nightlife New Year's party. It is not intended to be a dining event. It is recommended that if you wish to have dinner that you do so prior to the event at a place of your choosing. Your admission ticket includes entry to the event, the open bar service and music performance. Complimentary services are at the discretion of the venue.